Who is HuGo MoToR

HuGo MoToR is born on December 2, 1956, in a small town in German-speaking Switzerland. He studies music and contributes to the creation of some albums. He writes texts in Swiss German which will be published, but will mark his departure from his native Switzerland. He travels across Europe with his drums and ends up in Paris for 36 years. His search for new variants of sounds, colors, shapes, food for thought, leads him to create a silent opera of 1024 characters, who accompany him, from near or far still today in his art. He is interested in the concretes in which he lives. He works in search of new mineral binders and invents concrete-paint and olfactory memory concrete. He settles in the northern suburbs in hot cities where he discovers the cohabitation of violence and human tenderness. He invented himself as an artist at the service of society by bringing together young people from cities at war with each other around a giant mural project at the station they frequent and which is the terrain of their clashes.

HuGo MoToR is also a fervent watercolorist among the 232’000 more people each day, not to make a concept, nor to reproduce their present, but to dialogue with them in its search for a bright future. In 2016 he creates a parenthesis to his German-speaking Switzerland roots to find his past and speak his mother tongue again. He settled in a place breathing the history of the beginnings of the industrialization of Swiss peasant territories, in the canton of Zurich, at Stehli-Seiden-Areal in Obfelden, where he set up his workshop. He creates a flying office with 12 painted panels and installs them in Zurich to ask passersby what racism is. But he does not hold up. His thirst for learning and forge ahead pushes him into new adventures. He spent six months in Peru where he discovered the immense stone work of the Incas and their predecessors. His Peruvian paintings are exhibited at the Academy of Fine Arts in Cusco.

Hugo Motor then goes to Ethiopia where he continues his research started in the valley of Cusco. He visits cave paintings (5,000 BD), and discovers the oldest known artist’s studio in the world (37,000 BD). In parallel with all his travels, his work as an artist is prolific : A 3D mural at the Louvre Hotel in Addis Ababa, an installation of 60 paintings at the Addis Abeba Museum, an installation of very large format paintings at the Alliance Française in Addis Abeba and in preparation, Kernel 2022 at the Alliance Ethio-Française in Dire Dawa ; put in resonance photographs of cave paintings and nuclei of his acrylic works. 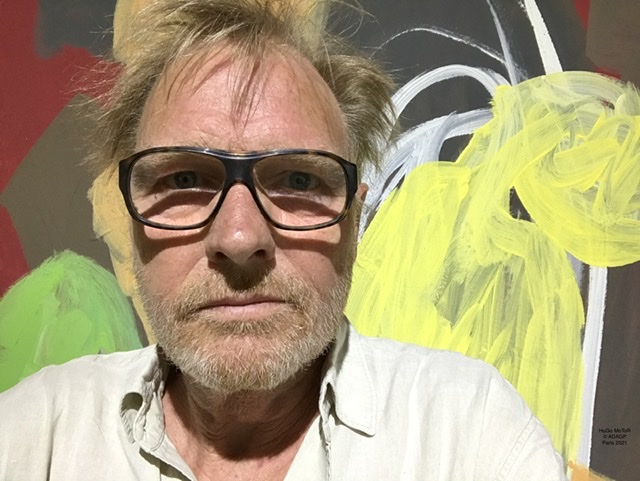 - Space Cave 2019, 3-dimensional fresco in the walls of the Louvre Hotel in Addis Ababa Ethiopia.
- Race-Race-Race-2017, Artistic performance under the arcades of the Helmhaus in Zurich Switzerland.
- Si t’es Pierre c’est Marre 2016 Art Action with the inhabitants, Le Blanc-Mesnil France
- Hypnons 2012, Private Order, Achères la Forêt France.
- Living Space 2007, Molding of 224 characters in the concrete of the school group The Four Seasons of Saint Pierre du Perray France.
- A gesture a word 2006, An encyclopedic work with the inhabitants of the city, Le Blanc Mesnil France.
- A collegiate work 2006, Initiated and managed by HuGo MoToR at the Blanc Mesnil station France, 6 users living in three cities bordering the station, are paid for the creation and the collegial realization of a 300 m fresco in the parking lot of their station France.
- Big Brothers and Sisters 2003, 1% artistic with student participation. Rehabilitation of the Vaumoise school by Bourdon Architects France.
- Beton sur ton 2001, Carte Blanche at 4000. Invitation of the Cultural Center Jean Houdremont La Courneuve France. Demolition of a bar. Sound installation with voices of ancient inhabitants. Exhibition of about fifty concrete works and a fragment of wall of the demolished bar. Sound performance danced in a cube in backlight. Clip-Art. Kinetics of the demolition France.
- A gesture a word 2001, Digital work with the inhabitants, La Courneuve France.
- Thousand cubes in concrete 2001, Creation and realization of a collective work with the children of La Courneuve leisure centers France.
- The Phantom of the railways 2000, RN 2000 Manifestation on the route of the National Road 2 transformed into a cultivable field between La Villette and Le Blanc-Mesnil France.
- Direct figuration The free cow 1985, For La Nouvelle Biennale in Paris La Villette France, is transformed into a place of culture. A musical and plastic intervention of Hugo Motor with the group "Erste Hilfe" and a cow, graciously brought by a breeder, come to notice the change of attribution of the places, of market of meat to market of the art.

- Olfactory concrete Partnership with Innovathèque SCBA for the Architect @ Work event at La Grande Halle de la Villette Paris 2012-2013
- Partnership with Holcim France SAS, Ecological Cement from steelmaking slag and O.M.G company, White marble sand, Creation, 2008.
- Partnership with Groupe Lafarge for the realization of a painting in Ductal, 2008.
- Research and creation with white fused cement, Ternal White, from Kerneos and USF dyes from Coloris GCC for the ECS exhibition in Nuremberg, 2007.
- Partnership with the Tourist Office of Seine Saint Denis, Biennial Exhibition, And here is the work ! Builders, On the Icade EMGP site in Aubervilliers, "The artistic, heritage and historical aspects are mixed with presentations of know-how", Installation Communiotic World, Aubervilliers, 2007.
- Creation for Holcim Concrete France s.a.s, Concrete cow, Concrete self placing Flexcimo, Festival of vivid architectures, Paris, 2006.
- Partnership with the Salon d’Automne and Holcim Béton France s.a.s, Creation, Hypnons, 2006.
- Provision of a research and application material, Ductal, Lafarge Group, 2004-2005.
- Research and creation with phospho-magnesian concretes and mortars, Rhodia PPMC Laboratory, Aubervilliers, 2000-2003.
- Research and development of spicy and olfactory concretes with the voluntary help of Jean-Pierre Aury. Paris 1995-2000 "Jean-Pierre Aury taught me, as and when we met, the relationships between the various elements involved in the composition of a concrete, whether structural or architectural, for a desert or a marine environment.The stacking of aggregates, cements, water, impurities, plasticizers, everything else interested me.It was most often time, when he found a niche, as he said, between two flights, around a beer, at the George V, but also sometimes in my successive workshops, where he was traveling with his driver. "

- The usefulness of an artist in an industrial environment, as part of his partnership with Rhodia, Presentation of artistic applications of materials developed in the laboratory and presentation of previous works so that all employees and Rhodia engineers can understand his approach and the relevance of his presence. Aubervilliers, 2003.

- URDLA, Order of four lithographs, H. U. G. O., about twenty copies each, intended for various museums in the world, Villeurbanne, 1990.

- In search of belonging, The Life History survey on the construction of identities. Under the direction of France Guérin-Pace, Olivia Samuel and Isabelle Ville, in the Grandes Enquêtes collection initiated by Martine Rousso-Rossmann and directed by Cécile Lefèvre. Editions of INED, 2009, Paris France
- MAB UNIVERSATILES, Poems - ISBN 979-10-699-3796-3